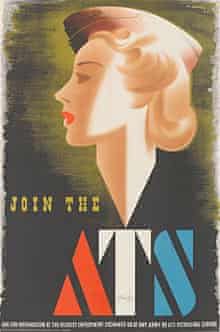 The Blonde Bombshell
During World War II, the War Office employed an official war poster artist. He was Abram Games, later to become recognised as one of the country's leading poster artists. Commissioned to design a recruitment poster for the ATS, Games chose as his model a young woman who happened to wander into his studio. The resulting poster was an instant hit with the public (who nicknamed it "The Blonde Bombshell") and led to thousands of young women joining the services, but concerns were expressed in Parliament about the image it portrayed of women in the forces.
This one-act play by local author Roy Maddox tells its story from the viewpoint of the young model and explores attitudes then and now to images of women. We've just performed the play - directed jointly by Michael Young and Martin Maynard, part of the team that produced Strangers on a Film last year - on the opening night of this year's Welwyn Drama Festival where the play won the award for Best Unpublished Play. The production had some very positive feedback from adjudicator Dave Bennett, and we're now considering putting it on in Royston, possibly for this year's Royston Arts Festival, so watch this page and/or the newsletter for details.

You can find additional information and updates on our Facebook page...

Sign up to our newsletter at the bottom of this page to be kept up to date with the latest news.